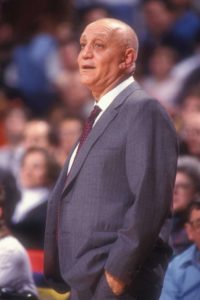 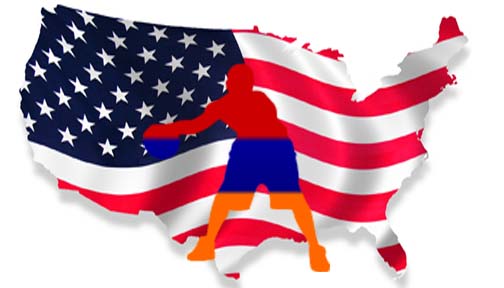 Jerry Tarkanian (August 8, 1930 – February 11, 2015) was an American basketball coach. He coached college basketball for 31 seasons over five decades at three schools. He spent the majority of his career coaching with the UNLV Runnin' Rebels, leading them four times to the Final Four of the NCAA Men's Division I Basketball Tournament, winning the national championship in 1990. Tarkanian revolutionized the college game at UNLV, utilizing a pressing defense to fuel its fast-paced offense. Overall, he won over 700 games in his career, and only twice failed to win 20 games in a season. Tarkanian was inducted into the Naismith Memorial Basketball Hall of Fame in 2013.

Tarkanian went to college at Pasadena City College and later Fresno State, earning a bachelor's degree while playing basketball. He was a head coach at the high school level before becoming a successful junior college coach, and returned to Pasadena City College and led them to a state championship. In 1968, he moved to a four-year college at Long Beach State College. Tarkanian established a successful program built on former junior college players, who were typically considered second-rate by other four-year programs. He was also the rare coach that dared to start a predominantly black lineup. He compiled a 122–20 record over five years at Long Beach before moving to the University of Nevada, Las Vegas (UNLV). He transformed the small program into a national powerhouse while granting his players the freedom to express themselves. Known for his colorful behavior and affectionately referred to as "Tark the Shark", Tarkanian became a celebrity in Las Vegas. He left the Runnin' Rebels for a brief stint coaching professionally with the San Antonio Spurs in the National Basketball Association (NBA) before finishing his career at his alma mater, Fresno State.

Throughout his career, he battled accusations of rules violations from the National Collegiate Athletic Association (NCAA), with each of his three universities suffering penalties. Tarkanian responded by challenging the organization to also investigate larger and more powerful universities. The NCAA ordered UNLV to suspend him in 1977, but he sued the NCAA and continued coaching while the case was pending. The Supreme Court ruled against him in 1988, but he remained UNLV's coach after a settlement with the NCAA. Tarkanian sued them again in 1992, and the case was settled when he received $2.5 million in 1998.

Tarkanian, the son of Armenian immigrants, was born in Euclid, Ohio in 1930. His mother, Rose, was a refugee of the Armenian Genocide during World War I. Tarkanian's maternal grandfather, Mickael, was an Ottoman government official who was beheaded by Turkish authorities. Mickael's son was also decapitated by the same authorities. Fearing for their lives, Rose and the rest of her siblings eventually escaped the Ottoman Empire and settled in Lebanon where Rose met George Tarkanian, an escapee of the Armenian Genocide. The couple married and moved to the United States. However, Jerry's father died when he was 13. By this time, Jerry showed his interest in sports, but his stepfather disapproved of his involvement with sports, while his mother encouraged him to pursue it. He initially attended Pasadena City College in California and played basketball at the college in the 1950–51 season. Tarkanian then transferred to Fresno State College, where he played basketball for the Bulldogs in the 1954–55 season as a backup guard. After graduating from Fresno State College in 1955, he earned a master's degree in educational management from the University of Redlands.
He began his coaching career with five years of California high school basketball, starting with San Joaquin Memorial High School in Fresno. He then moved to Antelope Valley High School in Lancaster (1958) and Redlands High School (1959–1960). He then moved on to the junior college level at Riverside City College from 1961 to 1966 and Pasadena City College from 1966 to 1968. He coached teams to a record four straight California junior college championships — three at Riverside, one at Pasadena.

Tarkanian moved to Division I basketball as coach at Long Beach State from 1968 to 1973, where he was among the first coaches to shun an unwritten rule that at least three of the five starting players had to be white. He also pioneered the use of junior college athletes. University of Nevada, Reno history professor Richard O. Davies wrote in his book, The Maverick Spirit, that Tarkanian's recruiting practice drew complaints that he was running a "'renegade' program built upon less than stellar students." When the 49ers made the 1970 NCAA Men's Division I Basketball Tournament, Tarkanian boasted that his team consisted almost entirely of junior college transfers. Long Beach State reached four straight NCAA tournaments, and established itself as a regional power. Though the schools were separated by just 30 miles (48 km), John Wooden of UCLA refused to schedule a regular season game with them. At the peak of Wooden's dynasty, the schools met in the 1971 West Regional final. Long Beach led at the half by 12, but UCLA prevailed 57–55 en route to their fifth straight national championship. Wary of continuing in UCLA's shadow, Tarkanian accepted an offer to coach at the University of Nevada, Las Vegas in 1973.

Prior to his arrival, UNLV was dubbed “Tumbleweed Tech” by locals, and their basketball program had no winning track record and minimal fan support. However, he achieved much success there, coaching the Runnin' Rebels from 1973 to 1992. In fact, it was Tarkanian's idea to call the team the "Runnin' Rebels." His teams were known for an up-tempo style, stifling defense, and going on long runs that turned close games into blowouts. They hit their peak after joining the Pacific Coast Athletic Association in 1982, winning or sharing 10 straight regular season titles and winning seven tournament titles.
He took his UNLV teams to four Final Fours. In the first, in 1977 (only seven years after the program joined Division I), the Rebels lost to North Carolina in the semifinals. The Rebels averaged 109 points per game that season in an era before the shot clock or the three-point shot. However, Carolina controlled the tempo with coach Dean Smith's famous four corners offense. Ten years later in the Final Four, UNLV was defeated by Bob Knight's Indiana Hoosiers, the eventual national champion. Finally, in the 1990 NCAA Men's Division I Basketball Tournament Tarkanian led UNLV to the championship, prevailing 103–73 against Duke while setting a record for margin of victory in a championship game. That season the team was heavily monitored by the NCAA, which visited their campus 11 times, and suspended 10 players at various times. The 1990–91 team appeared poised to repeat as champions after running their record to 34–0 while winning by an average margin of 27.3 points. However, a rematch against Duke in the national semifinals saw the Blue Devils prevail 79–77 after the Rebels' Anderson Hunt missed a 22-foot shot at the buzzer.

He returned to college coaching at alma mater, California State University, Fresno, from 1995–2002 and led them to six consecutive 20-win seasons. Tarkanian led the Bulldogs to five NIT tournaments and two NCAA appearances. He retired from coaching in 2002 with 778 career Division I wins.

The floor of UNLV's home arena at the Thomas & Mack Center was named "“Jerry Tarkanian Court" in 2005. A bronze life-size statue of Tarkanian was added outside the arena in 2013. Since 2012, Bishop Gorman High School in Las Vegas has held the Tarkanian Classic, a high school tournament featuring some of the top team's in country. 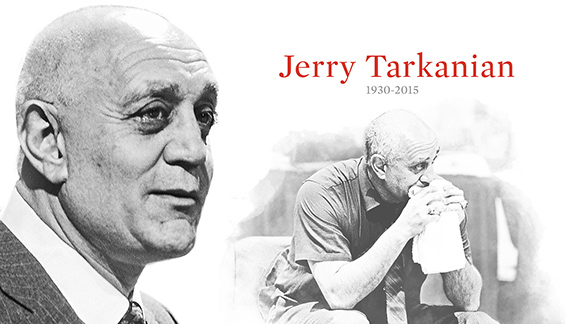 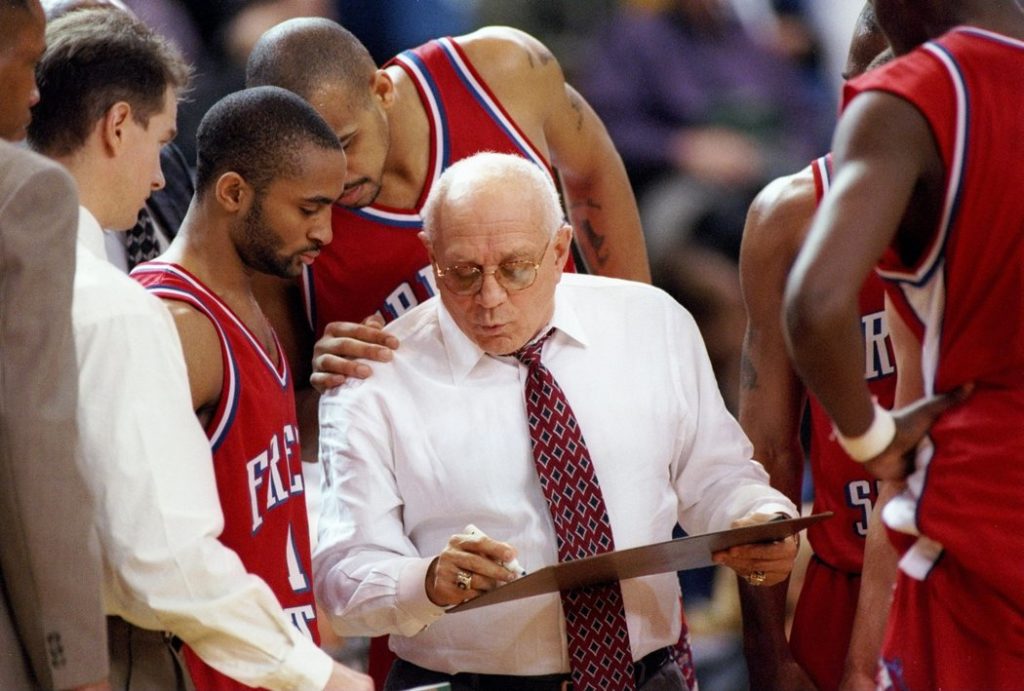 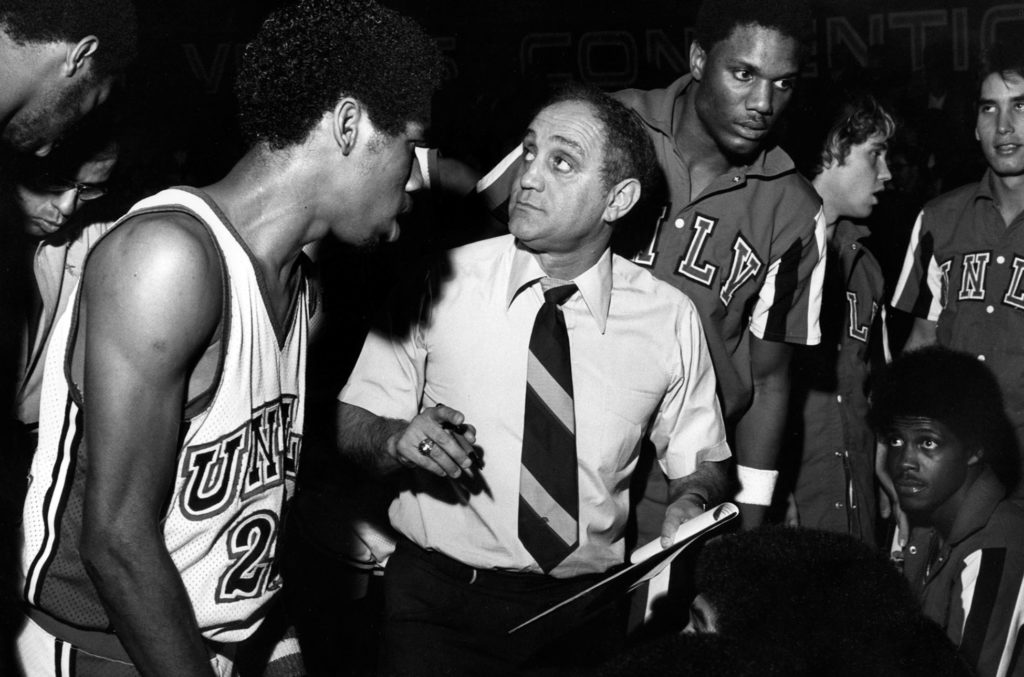 As a memorial tribute, the casinos along the Las Vegas Strip dimmed their lights for roughly three minutes in Tarkanian's honor on February 18, 2015.

Tarkanian also has a middle school located in Las Vegas named after him and his wife.