Steve Sarkisian is an American football coach and former player who is currently the offensive coordinator for the Atlanta Falcons of the National Football League (NFL). He has served as the head football coach of the University of Washington from 2009 to 2013 and at the University of Southern California (USC) from 2014 to 2015. He played college football as a quarterback at Brigham Young University (BYU) and professionally with the Saskatchewan Roughriders of the Canadian Football League (CFL).

After a standout baseball and football career at West High School in Torrance, California, Sarkisian's size (6', 165 lb) did not attract any college football offers. He began his collegiate athletic career in 1992 at USC as a non-scholarship middle infielder on the Trojans baseball team. He struggled playing NCAA Division I baseball and transferred after a semester to El Camino College, a two-year community college adjacent to his hometown of Torrance, where he played shortstop. At the urging of El Camino head football coach John Featherstone, one of his instructors, Sarkisian restarted his football career.

As a redshirt freshman in 1993, Sarkisian earned All-Mission Conference honors. In his sophomore season, he was named a junior college All-American after setting a national junior college record by completing 72.4 percent of his passes.

As a junior, Sarkisian transferred to Brigham Young University in Provo, Utah, for the 1995 season. He was recruited by DeWayne Walker, then an assistant coach for the BYU Cougars. Although Kansas State and Washington State showed interest, Sarkisian chose BYU primarily because the school boasted more combined Davey O'Brien- and Heisman-winning quarterbacks in the last decade than any other had in the previous 50 years of Division I-A.

At BYU, Sarkisian was coached by offensive coordinator Norm Chow under head coach LaVell Edwards. As a junior, Sarkisian passed for 3,437 yards and 20 touchdowns, earning All-Western Athletic Conference honors. Sarkisian finished the season in spectacular fashion, completing 31 of 34 passes for 399 yards and three touchdowns in BYU's 45–28 victory over Fresno State. His completion percentage in the game (91.2 percent) set a NCAA record.

As a senior, Sarkisian opened BYU's 1996 season by passing for 536 yards and six touchdowns in the Cougars' 41–37 upset victory over Texas A&M in the Pigskin Classic. The 536 yards passing were the most ever by a player against Texas A&M. Sarkisian finished the game with a 46-yard touchdown pass to K. O. Kealaluhi to seal the victory.

BYU finished the regular season with a 13–1 record, defeating Wyoming, 28–25, in the WAC Championship Game. Sarkisian passed for 4,027 yards and 33 touchdowns during the regular season. His 173.6 passer rating led the entire NCAA. For his efforts, he was named WAC Offensive Player of the Year and a second-team All-American. Sarkisian was also awarded the Sammy Baugh Trophy as the nation's top passer, making him the seventh BYU quarterback to win the honor. He was also featured on the cover of TV Guide in December 1996. BYU finished the season with 19–15 win over Kansas State in the Cotton Bowl Classic. Sarkisian threw a pair of touchdown passes in the fourth quarter to lead the Cougars to a come-from-behind victory. BYU finished the season with a 14–1 record and ranked fifth in the nation in both the AP Poll and Coaches' Poll. The Cougars became the first Division I-A team in NCAA history to win 14 games in a single season. Sarkisian's 162.0 career passing efficiency rating is third on the all-time NCAA list.

Sarkisian earned his bachelor's degree in sociology from BYU in 1997 after receiving his associate's degree in general studies from El Camino in 1994.

Sarkisian played professionally for three seasons, 1997 to 1999, for the Saskatchewan Roughriders in the Canadian Football League (CFL). He was a starter in the 1999 season, finishing with 16 touchdown passes and 21 interceptions. His team finished with a dismal 3–15 record, prompting Sarkisian to end his playing career. 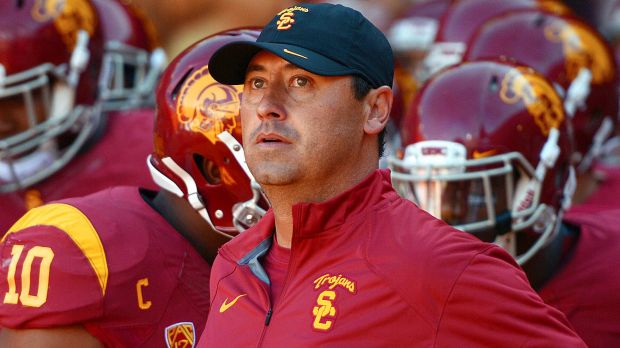 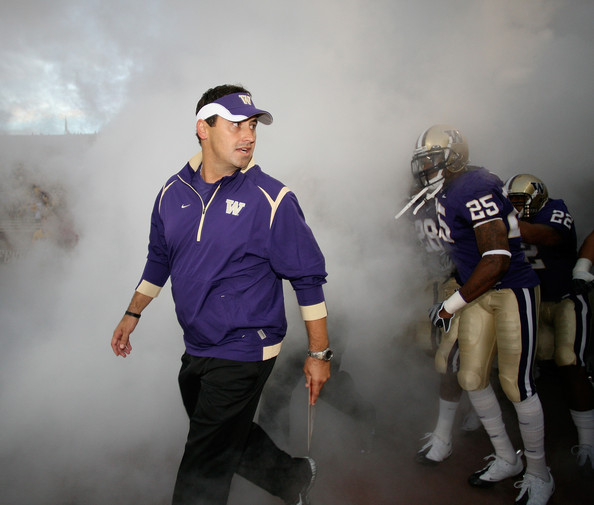 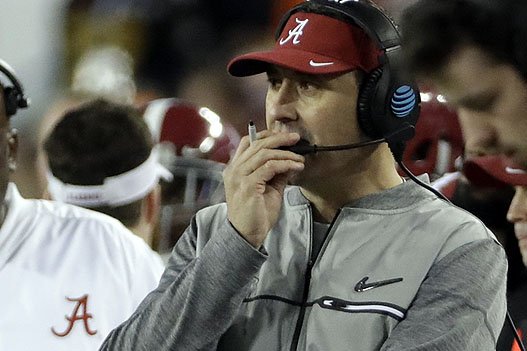