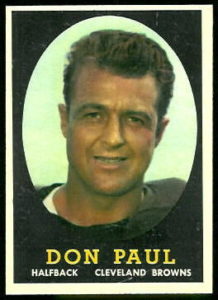 The 6-foot-1, 225-pound Paul earned a UCLA football letter in each of four seasons — 1943, '44, '46 and '47 — with his Bruin career split by Navy service during World War II. He played center and linebacker, was chosen team captain three times and, according to UCLA, was the first freshman player to be named team captain.

The Rams drafted Paul, and during an eight-year career he became one of the NFL's toughest middle linebackers in the 1950s. Before there was a Super Bowl, the Rams played in three consecutive NFL championship games with Paul as a defensive mainstay, beating the Cleveland Browns, 24-17, in 1951.

In 1955, Paul was voted dirtiest player in the league in an informal poll.

"I always tried to discern the difference between a dirty and an aggressive player," Paul told The Times in 1978, many years after he had retired. "I never thought of myself as a dirty player. To me, a dirty player is a cheap-shot artist — a biter, a kicker, that sort of thing.

"But a rough guy usually plays it to the hilt and gives no quarter whatsoever. … He can be called dirty, but people really mean that he's super aggressive."

In 1986, the year he was inducted into the UCLA Athletic Hall of Fame, Paul told Times columnist Jim Murray, "Look at it this way, I never bit nobody."

After his football career he worked as a broadcaster on Rams telecasts and ran several successful restaurants in the San Fernando Valley, including the Ram's Horn.