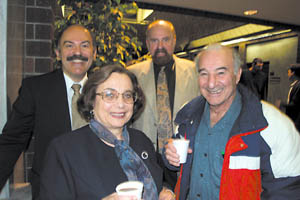 He resigned from his final coaching job, water polo, in 1977 and retired from the university in 1993.

Hairabedian was an Amateur Athletic Union gymnastics champion in 1950 and '51, competing in floor exercise for USC. He taught physical education and coached gymnastics and football at Penn State, then joined the Fresno State coaching staff as a football assistant in 1953.

He started the Fresno State swimming program in 1954 and the water polo program four years later. In 1978 the NCAA awarded Hairabedian its Master Coach Award for swimming.

After Fresno State eliminated men's swimming and water polo in the 1990s, Hairabedian became a frequent vocal supporter of the programs.

Hairabedian earned three degrees in physical education -- a bachelor's from USC, a master's from Penn State and a doctorate from Stanford -- and was a member of numerous educational and athletic organizations.

An Olympic historian, Hairabedian attended many Olympics, including this summer's Athens Games.